When I was in high school, I regularly participated in creative writing competitions where we had to write essays around particular topics. In my final year of high school, we used to write a 7-page essay a week for English class. The world changes. On January 26th, 2011, two sisters from Panama, Cristina Sales Ancines (20) and Jennifer Sales Ancines (15) were crowned “World’s Fastest Texters”, beating competitors from 16 countries at the second annual LG Mobile Worldcup Championship. 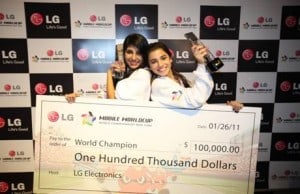 The official phones were the LG Chocolate BL20 and the LG Town GT350 and contestants had to undergo a series of rounds during which they competed to be the first to type phrases exactly as they appeared on plasma screens (obviously, LG ones) with no mistakes or abbreviations (maybe it will help bring proper spelling back).

The South African team of Olivia Burton and Wilbur Hough placed 8th out of the 16 countries that competed in this year’s tournament while Korea took second place and Brazil took third. Contestants also had opportunity to become the Guinness World Record holder for fastest texting on a QWERTY cellphone. The record was set by Australia’s Cheong Kit Au who set a record of 1min17secs to type out a 264-character text.

While this may seem frivolous to some, the prizes were decent. First prize was USD100,000, second was USD20,000 and third was USD10,000. 15-year old Grade 10 student, Olivia Burton, who won the National competition, received R50 000 plus LG GT350 Chatterbox Plus handset, while runner up, 23-year old freelance computer specialist Wilbur Hough won R20 000 and the Chatterbox Plus handset. Wilbur has also been approached by a possible employer for his mobile operations services. To prepare for the Worldcup, they both spent most of their time texting and giving themselves SMS speed tests as well as living on MXIT and IM services. 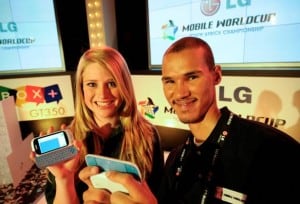 While they did not make the top three, some extra cash and a trip to New York is never a bad thing. And it is great PR for LG Electronics. A win-win situation for all.

Showmax Steps Into The Arena