This life is some work. I often feel like I’m ODing on trying to deal with this reality better, from a professional, business and personal perspective. Every day I’m reading, doing exercises, working to implement a more efficient way of tackling the day-to-day. There is no single manual to making it work. There is no one way of doing things. As with so many aspects of life, it’s about finding one’s own path amidst the multiple tools. And it is a work-in-progress. From David Allen’s Getting Things Done, The One Thing by Gary Keller and Jay Papasan and Stephen R. Covey’s 7 Habits of Highly Effective People to John Kehoe’s Quantum Warrior and Graeme Butchart’s genius programme, I’ve been on an extreme diet of self improvement that shows no sign of abating.

Another book I’ve recently engaged with – well, read through the GetAbstract summary on the Nashua Time Hub, is The Power Of An Hour by Dave Lakhani which is an approach based on making the most out of an hour. Many different titles refer to ‘the zone’ that many athletes experience when you can do no wrong and how to create a conducive enough environment, whether internal or external, to ensure you can get that from a business and personal perspective. With The Power Of An Hour, Lakhani explores the same thinking within the framework of an hour and gives you tools to ensure that you do maximise it. He breaks down “eighteen hours of power” in both personal and business life and, as others have done, encourages you to be as specific as possible, whether it is identifying challenges, solutions and next actions. The summary is a quick read. It does make you want to read the full book even though the content is not absolutely brand new and overlaps with the other reading I’ve been doing. 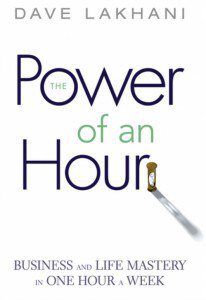 Overall, the one thing that’s stood out, which is something that is explored in depth in The One Thing (see what I did there) is the idea of habit. Samuel Johnson once so aptly said, “The chains of habit are too weak to be felt until they are too strong to be broken.” This is what I’m grappling most with. As I create my own system, it is the bad habits I’ve acquired along the way that are hard to break. In The One Thing, Keller (and Papasan) reference a 2009 University College of London study that sought to answer the question, “How long does it take to establish a new habit?” They state, “The results suggest that it takes an average of 66 days to acquire a new habit. The full range was 18 t 254 days, but the 66 days represented a sweet spot … Self-help circles tend to preach that it takes 21 days to make a change, but modern science doesn’t back that up.”

The idea is to pick one thing and focus on making that a habit – a positive one – before moving onto the next one. I am learning that one shouldn’t also beat themselves up when they wobble. A lesson I’m working very hard at learning. It’s so easy to sink in guilt and then it becomes a self-fulfilling prophecy. Stay focused, get up when you falter and keep on moving. In the long run, a little something is better than nothing.

There is a Place for Introverts

Get A Free Office Efficiency Assessment

How To Become More Efficient With Your Time