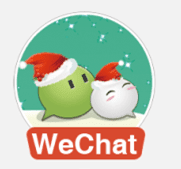 While social media has cut into the instant messaging space, apps like Whatsapp and BBM continue to battle it out for a presence on our mobile devices. TenCent, with WeChat, has carved out a significant space for itself in the Asian markets as a social messaging service. Launched in Africa, with its primary base in South Africa (Naspers owns a stake in Tencent), a few months back, WeChat has been aggressively establishing itself in SA and across the continent , firstly with its ad with Argentinian footballer Lionel Messi, and with the WeChat Guy. (See article I wrote on DESTINY Man site: WeChat Comes To Africa).

What sets WeChat apart is the facility for so much more within the app itself, including Stickers, Moments (which is a social timeline of sorts), and the ability for Official Accounts to share unique content directly with their followers. For example, the WeChat Guy recently travelled to Las Vegas and shared some of his experiences from there. And South African rapper, TV presenter and producer, radio host, MC and recording artist Proverb regularly shares what’s happening in his life, runs competitions and even shares music via his official account.

For Christmas, WeChat has added the ability to send a personalised digital Xmas ‘card’ incorporating an image and voice note. To check out mine, click HERE.

How To Buy Products Directly From Magazines