Being a layman, when I first heard that there was a new Nokia smart phone that was the closest to a mini-laptop as they have ever come, I looked to the geeks I knew. It was towards end of last year and I was attending a couple of Nokia events with those in the know who all reckoned it was Nokia’s best ever device. I had the opportunity to briefly fiddle with it but, at the time, it wasn’t going to be available in South Africa. The hype around and response to it from the techno gurus made Nokia change their mind and it will now be available sometime this year. 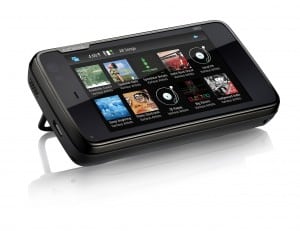 While a bit heavy and bulky, the N900 does make up for it with capability. You can flip between different personalised screens so I had one screen setup for my social media, including Facebook, Twitter and YouTube. Truth be told, I spent more time on these than anything else… well, these and the games. I’m not a big fan of touch screen but I enjoy that I can work with touch and QWERTY keyboard. I did struggle with top row of buttons though because of my chubby thumbs.

I am learning about mobile operating systems and the N900 runs the Linux-based Maemo which feels very much like a cross between a cellphone and a PC in terms of how the software works. You can run multiple applications, have different windows open and move between them in the same way that you can on a laptop or desktop.

The number and range of pre-loaded applications were such that I didn’t get a chance to try all but I definitely enjoyed my time with the phone. I have two cellphones but really felt that, if I were to get a N900, it would be most productive as my only cellphone. I did spend more time with social media and messaging than anything else and found it very cool that my smses were laid out as a sequential thread, tracking my conversation with each person as opposed to separately according to time received. A small thing but it did make me giddy.

The touch screen is relatively responsive…. tap icon to enter application and tap anywhere else to go back. It also comes with a stylus, which does help reduce the amount of fingerprints on the 3.5 inch screen. All in all, I enjoyed spending time with the N900. It isn’t one of those devices that you get just to be cool but rather to use to its fullest capacity.

I found a cool video from Stuff.tv that breaks down a lot of the N900’s capabilities. While it was a pre-production model, I found a lot to be as it is with the final product.