Gareth Cliff On Everything (The Book)

This post is one of many happening across a couple of blogs of people I know and people I don’t know. I have been more fascinated by the approach in launching and building hype around a book than I have been about the book itself. If you know of Gareth Cliff – radio DJ and Idols judge -, you will know that some consider him one of the polarising individuals within the South African media landscape because of his forthrightness and absolute willingness to weigh in on any topic like the proverbial bull in the china store. I generally do not follow Cliff, whether it is his radio show, his twitter account or even Idols, so my view of him has always been one of mild indifference. Every now and then, an opinion he expresses registers and offends me slightly, but I move on. Sometimes, he doesn’t offend me and still I move on.

And then, through a friend, I am contacted to participate in the #CliffOnEverything book tour which involves various bloggers being given Gareth Cliff on Everything to review and do a post on a specified date. Now that fascinated me; creative approach to launching something and building some attention and interest.

Sidebar: I told two people that I was getting the book to review. The first responded: the idea of Gareth Cliff writing a book makes me want to vomit. The second responded: can I read it when you are done, I really enjoy his radio show. 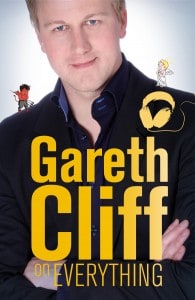 I took the book because I was intrigued. I opened it without expectation because I had no idea what the book was about. Upon opening it, it reminded me of one of my personal pet peeves in this microwave, 140 character reality we seem to be submerging ourselves in. Follow the twitter streams of many and what you get is instant opinions on what seems like every single occurrence, comment or event that takes place anywhere in the world. We have reached a place where people seem to feel the need to have an opinion on every single thing, sometimes without understanding of nuance or a desire to inform oneself first. I had a friend who doesn’t drive nor own a car asked to comment on the petrol price and, when he declined to comment because he didn’t have a clue, he was deemed difficult.

Gareth Cliff, as a public personality and radio DJ, has platforms to share his opinions on everything, which he does at will. With his book, he is merely taking it to another medium but it is simply an extension of what he does in other spaces. The book is structured relatively randomly with a couple of pages each devoted to a vast range of subjects from drinking rules (Phuza Thursday), licenses for parents (Suffer the little children) and porn on television (Debbie Does Randburg) to fat people (Economy class, economy arse) and owning a gun (Lock ‘n load). In reading it, I randomly flipped through the book, stopping to read ‘sections’.

The book feels like a twitter stream without character limits. It doesn’t really go into any kind of depth on the various topics and so one’s engagement with it is simply whether you agree or don’t. There is no compelling evidence to back up most of the thoughts and so, there are a couple of thoughts that I agree with and others I don’t. Having read the book, I continue to be indifferent to Gareth Cliff. He has a space in society and there are those interested in his opinion. I do not know him personally, nor have I engaged with him directly. If I had, perhaps I would be a lot more interested, particularly if I found I enjoyed interacting with him. I don’t get a sense of him and who he is in this book. His book did not enlighten nor did it diminish my world. If I’d flipped through it in a book shop, I probably wouldn’t have taken it home.

In Your boring life, he says “How do you feel about celebrities? Aren’t you tired of them? I don’t look up to them, and I’m not interested in photographs of them all dressed up ……. The need for some human mammals to watch the uninteresting activities of other human mammals means that some of us just have too much time on our hands or a desperate need to fantasise.”

I fully agree with this but also feel that Gareth Cliff, in a South African context, is a bit of a celebrity hence the interest in his opinion on Everything. If you are a follower of him, this book will probably be of interest to you. I have a copy to give away. Send me a tweet (@kojobaffoe) with the hashtag #CliffOnEverything. I will randomly select a recipient by Thursday.