There are those albums that creep up on you. You press play without really expecting anything. You have heard nothing of it. There are no preconceived ideas of what it will sound like. There are no egos, no back story, no tabloid fodder that predisposses you to interacting with it positively or negatively. You go into it as a blank canvas for the musician to paint whatever they deem fit on you. It is – simply – about the music. Herbie Hancock‘s The Imagine Project is such an album. 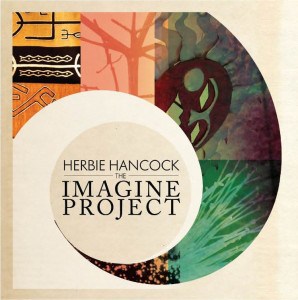 Herbie Hancock’s career as musician started about 50 years – and over 40 albums – ago and, in that time, he has collaborated with the best in music across genres from Miles Davis, Chick Corea and Brandford Marsalies to Rob Swift (The X-Ecutioners), Carlos Santana and John Mayer.

While he has produced duet albums and other collaborative products, The Imagine Project may just be his most ambitious and his most beautiful. Starting off with the simple, yet powerful Imagine by John Lennon, he draws out a passion and energy from Pink and Seal that cannot be described.

Hancock, with this Project, collaborates with artists from all corners of the earth, creating a musical canvas that is a masterpiece and a reflection, in a way, of our humanity and the genius that is created when human beings work together with an open spirit. The album is an ideal, ambitious in a way that is hopeful, and this is reflected in each song.

The track listing features great music with artists who came to the experience with no ego, merely a love for music, including:

In sharing this album, Hancock says: “Music truly is the universal language. The Imagine Project explores that concept across the globe, uniting a myriad of cultures through song and positive creative expression.  My hope is that the music will serve as a metaphor for the actions taken by the inhabitants of this wonderful planet as a call for world harmony on all levels.”

Each song has its place. Each song fits. It is a complete album. But I must say my favourites are probably Imagine, The Times, They Are A Changin and A Change Is Gonna Come.

The Herbie Tree is a wiki-type tool that gives background on the album as well as links to info on all the people that he has worked. The visitor is also able to assist in the updating of the info on there.

Wake Up Call From John Legend & The Roots