I really don’t know how I feel about this. In the lead up to the World Cup, South African flags became all the rage. Before, you would only see them on government and other official type buildings and spaces. Just before, the flag was on cars, in windows, on t-shirts, etc. It did feel a bit strange but it was heartening to see a certain pride being taken in nationhood.

Sadly, as we journeyed deeper into the tournament – and after Bafana Bafana was knocked out – the flags seemed to become fewer and fewer, particularly on cars. Now. With the World Cup only a few days behind us, I have not seen as many cars sporting the South African flag which, in a way, is sad. I do think one can take pride in where they are from without it being a popularity contest, a “who is better than who”. I don’t think one should wait for an event like the World Cup to celebrate what one feels is positive about their country.

For those who do not see the reason for “waving the flag” any longer, Nashua Mobile have modified their “Fly The Flag For South Africa” campaign to a “Donate A Flag” campaign: “South Africans can now donate their flags to charity by simply popping in at any Nashua Mobile store and dropping it in the dedicated bins in each store. These flags will be given to regional charities to be repurposed and sown into useful items such a duvet covers, pillow cases and curtains.” 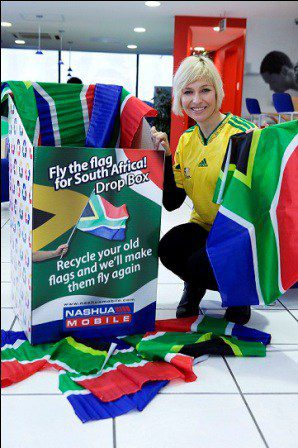 While it sounds like a worthy cause, creating necessary items for those in need, I was initially concerned as to whether they had taken into consideration the guide for using the South African flag as compiled by  The Southern African Vexillological Association (SAVA) – Vexillology is the study of flags in all their shapes, sizes and forms.

I chatted to the Nashua Mobile people and it seems they have: “Nashua Mobile has a deep respect for our country’s national symbols. We will treat our flag with the consideration it deserves throughout this project and will be guided by the regulations regarding the flying of the national flag, which were published in 1994. We have also submitted samples of pillow cases and duvet covers to the DTI for approval before we make them available to the selected beneficiaries.”

See below for the guidelines:

Treat your flag with respect

The National Flag must at all times be treated with dignity and respect. In the Regulations Regarding the Flying of the National Flag, published just before the flag was adopted in 1994, the dos and don’ts are clearly spelled out.

The flag must never:

Use of the flag in artefacts and products is subject to the approval of The Presidency and, in the case of manufactured items, theDepartment of Trade and Industry.

Traditional rules for handling the flag

There are a number of traditional rules of respect that should be observed when handling or displaying the National Flag:

Another Official Song For The Football

Ekhaya – SA’s Home Away From Home

Get A Free Office Efficiency Assessment

How To Become More Efficient With Your Time