Being a Black Stars fan, I obviously admire many a player on the team, including Michael Essien, Stephen Appiah, John Mensah and Asamoah Gyan, as well as the young guard working their way into first team, after winning the FIFA U21 World Championship and helping Black Stars reach the Africa Cup of Nations 2010 Final. 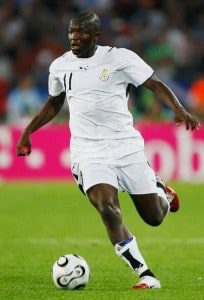 That said, from when he first burst into Ghana’s first team, I’ve been a fan of Sulleyman Ali “Sulley” Muntari. It is disappointing that he has been temperamental and, as a result, left out of the team because of his actions rather than his playing ability. For the recent Africa Cup of Nations, he was not called up because of conflict with the coach. He has since apologised and played in Ghana’s March friendly against Bosnia-Herzegovina, scoring the Black Star’s only goal in the 2-1 loss.

He first broke into public consciousness with some outstanding performances for Ghana’s U20 team (while still only 16 years old) and got a runner’s up medal at the 2001 FIFA World Youth Championship. At the time he was playing for Accra’s Liberty Professionals but was quickly scooped up by Udinese in Italy, where he stayed for 5 years before moving to Portsmouth in England in 2007. He won an FA Cup medal with them in 2008.

After only one season with Portsmouth, he made the transfer to Jose Mourinho’s Inter Milan in 2008 where he has been since, although not playing as regularly as one would hope. He has, however, won the Italian Super Cup (2008) and the Serie A title 2008 – 2009 with Internazionale, with the possibility of winning even more.

He is a critical component to the Black Stars and I hope he stays beneath radar and focuses on helping the team achieve dreams in the 2010 FIFA World Cup happening in South Africa this June / July. He is also young enough, at 26, to feature in another two or three Africa Cup of Nations tournaments, as well as the next World Cup in 2014.

Battle of the Football Ads