The idea that a couple of people would pay money to come and spend 2/3 hours having dinner with me is one that I still struggle to wrap my head around. Yet, about a week ago, about 8 people did, at a SAB Pop-up Dinner.

The email said: “We are organising a mass food and beer pop-up kitchen with SAB in Johannesburg. All the pop-up kitchens will happen on the same night (Saturday 27 October) and they will all start at the same time (19:30). We would like to invite you to host one of these events at any location of your choice. The twist is that you will not be inviting the guests. Guests will book for the dinners with us and they will only find out on the day where they are going.”

Okay, so they didn’t chose me specifically but the number of hosts was limited enough to make me feel slightly better. Part of the hosting involved also preparing a dinner for said guests which would be paired with a different beer by an expert in such things, in my case SAB Trade Brewer Anton Erasmus.My culinary skills leave much to be desired so I enlisted the assistance of a friend of mine who happens to be, amongst many things, a chef. 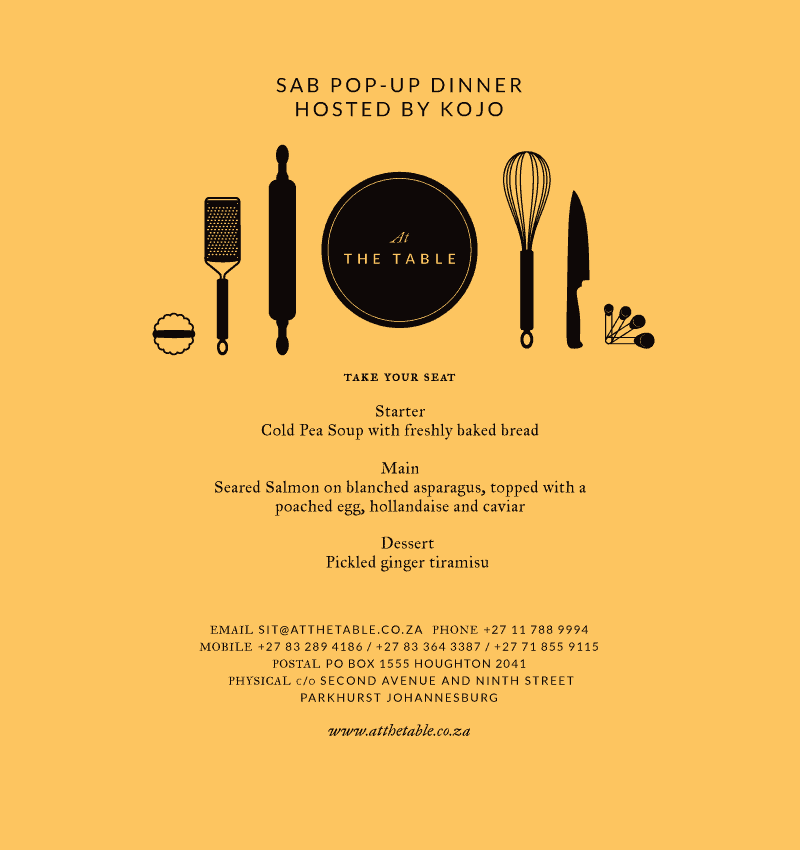 I also decided to host it at At The Table in Parkhurst, a very cool space I’d been meaning to do something with. I must confess that, as a result, my real work was simply to pitch up and engage, which I did adequately, methinks. I also created the playlist for the evening which meandered from Pharoahe Monch and Jimi Hendrix to Stevie Wonder and Erasure, reflecting the randomness of both my music taste and the evening. Despite an intense rainstorm just before people were to arrive and Anton’s car semi-dying on him outside, the evening was a fascinating journey into the detailed history of beer and how it reflects and relates to the history of where the different beers originate. Anton’s wealth of knowledge is inspiring and we all were thoroughly entertained and enlightened. Conversations ranged from food, beer and film to parenting and music. The highlight, for me, was the pairing of Castle Milk Stout with the Tiramisu. We also tried it with Carling Black Label and that went down well but nothing compared to the Milk Stout. It’s hard to explain but the combination gave the Milk Stout a lightness and a crispness that was very conducive to repeated consumption. 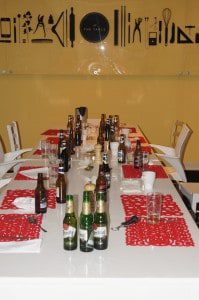 Overall, an enjoyable evening. I have never been much of a beer drinker but, in understanding a bit more about the culture, history and what can be done with beer, I might just experiment a bit more. Just have to figure out how to make that Pickled Ginger Tiramisu on my lonesome.